A star about 800 light years distant exploded in the southern constellation of Vela 11,000 – 12,000 years ago. The ejected material expanded into the surrounding interstellar medium at incredibly high speeds and temperatures, ionizing gas and causing it to glow, not only in optical wavelengths shown in the image, but also in X-Ray and Radio wavelengths. This is the Vela supernova remnant. The bluish-green tendril structures shown in the image are the shock fronts from this interaction. Eventually, these features will dissipate as they expand and cool. The explosion left a rapidly rotating (every 89 milliseconds) neutron star, referred to as the Vela Pulsar, which astronomers discovered in 1968. Its location is shown in the annotated image below. The Puppis A supernova remnant is also shown in this image in the upper right, but it is much further away at 6,500-7,000 light years.

This was a joint project with my observatory partner, Josep Drudis (https://astrodrudis.com/the-vela-supernova-remnant-a-wide-field-mosaic/) at the iTelescope.net facility at Siding Spring, NSW, Australia, and could not have been done without his patience and perseverance. It represents seamlessly stitching together 6 separate panels that included at total of 53.4 hours of exposures. This is primarily a narrowband image, with the main goal of emphasizing the shock front structures. Hydrogen-alpha (H-a) was color-mapped to red-magenta and Oxygen (OIII) to blue-green (teal). Star colors were augmented with short exposures from red, green and blue filters. We made a synthetic “super-luminance” from these data, and augmented it with high-resolution data that we have both taken on the CDK20 0.5m f/6.8 reflector, such as NGC 2736 and others, which can be found on our respective web sites. 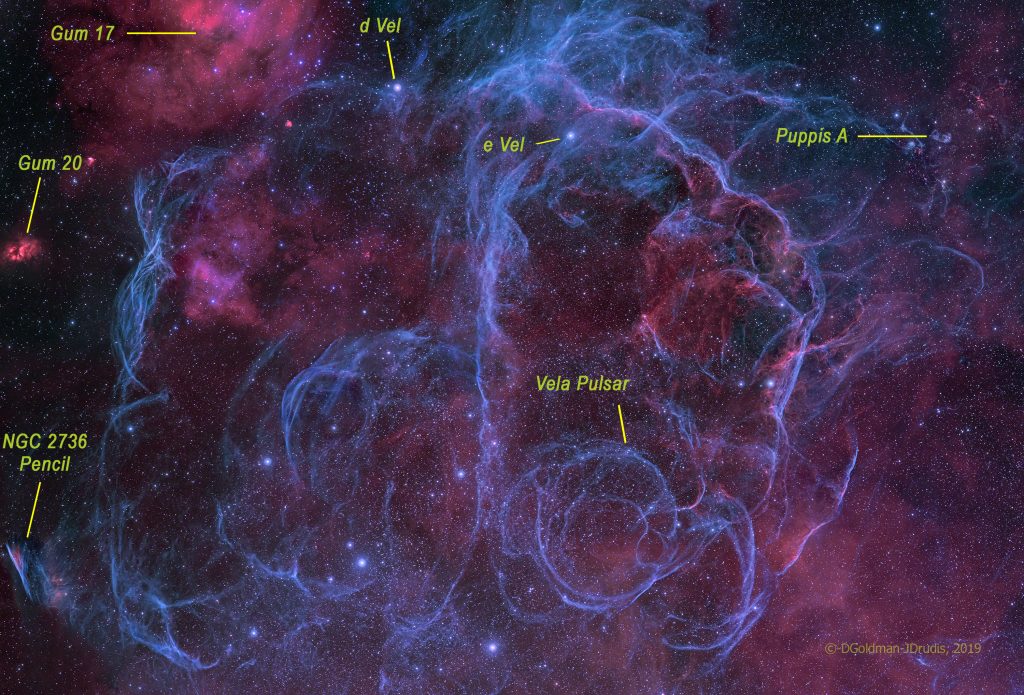