For a higher resolution image, click here.
PLN36-1.1 is a planeatary nebula located in Aquila to the NW of the Wild Duck Cluster, M11. It is approximately 1.8 arcmin. North is up at the 11 o’clock postion in these images. It can be found in one of TheSky’s (PLN) databases. It is also known as Sh2-71.
The central star is a binary with a period of ~68d varying by nearly 1 magnitude. The central object is a highly reddened B5 dwarf that is 1700 pc (5600 ly) distant. It is thought that PK36-1.1 contains 3 pairs of bipolar lobes shown in this drawing from the linked reference from 3 separate episodes, all younger than 10,000 years. 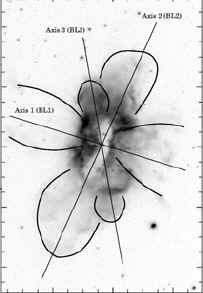 .
Narrowband exposures were 30 min. each, and the RGBs were 5 min each, to obtain G2V-weighted star colors. The narrowband images were composed using the clipping layer mask method described by Dr. Travis Rector at Advanced Imaging Conference in San Jose, CA in 2004. H-a was mapped to a red-magenta and OIII was mapped separately as G and B. Once completed the narrowband image was merged into one layer. The RGB layer was then added solely for star color. A zoomed-in image of the planetary nebula is presented below:
. 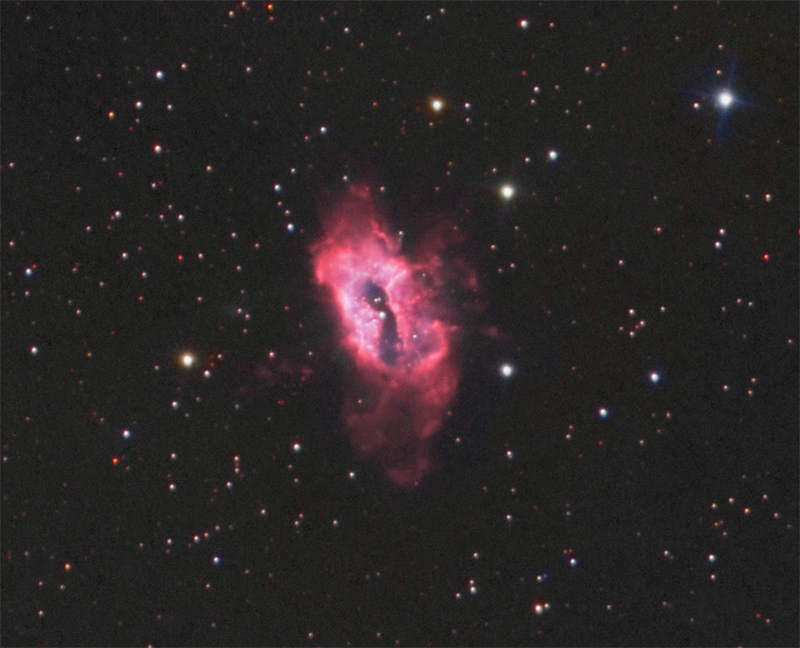