The Sombrero Galaxy, M104 (NGC 4594), is a brilliant, edge-on galaxy with a prominent dust lane 28 million light years distant in the constellation Virgo. Actually, it is halfway between Virgo and Corvus. It is 50,000 light years across; approximately one third the size of our Milky Way Galaxy. It is easily seen in modest telescopes and is a favorite target for astrophotographers. The white, bulbous core is divided by a dark dust lane representing the edge of the spiral galaxy, which is tilted only about 6 degrees from our line-of-sight. About 2,000 ancient globular clusters have been detected around the core, about 10 times as many as found around our galaxy. In contrast the dust lane appears to contain much younger and brighter stars. Some indication of a spiral structure inside the dust lane is suggested in the image above (click in image twice for maximum enlargement). The core contains a one billion solar mass black hole. There is some evolution regarding the classification of this galaxy. In 2012 the Spitzer Space Telescope examined M104 using infrared light. The new data suggest that it is two galaxies in one, reclassifying it from a “flat disk” spiral galaxy to an elliptical galaxy with a spiral galaxy within it, something akin to Centaurus A. The amazing mosaic image from the Hubble Space Telescope is presented for comparison below: 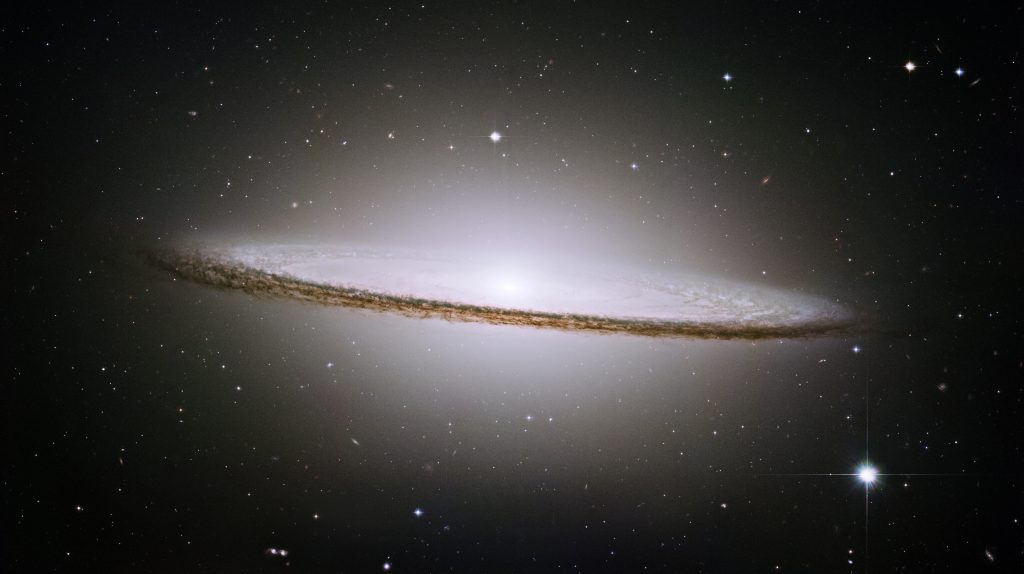