This image marks a return to one of my favorite planetary nebulas, M27 or the Dumbbell, with a focus on the extended halo. This effort was done with Josep Drudis, who kindly supplied the data from his 24″ reflector in New Mexico. We both processed our own versions and posted them on our respective web sites (https://astrodrudis.com/messier-27-final-version/) . This is primarily a narrowband interpretation of M27 with traditional RGB data added for star colors. It contains 58 hours of 40 minute sub-exposures using 3 nm Astrodon OIII, H-a and NII filters. At a bandwidth of 3 nm about 75% separation can be obtained between H-a and NII. They are both the same deep red color. Spectral data of M27 shows that it contains considerable NII. In fact, the wispy “clouds” in the core are strongly enriched in NII. Although I tried to map different colors to H-a and NII to separate potentially different structures, I was not able to achieve the results that I liked. Therefore, I mapped them both to red. OIII was mapped to blue/green. My previous deep effort from 2008 on a 16″ RC telescope is here.

The shapes of planetary nebula are highly varied. For example, many are bipolar in the shape of a barbell or two cones opening up opposite of each other. Let’s say we have the latter. The expulsive event (or events) opened up two opposing cones. Furthermore, let’s say that the object is oriented such that these openings are nearly in the plane of the sky, or about 90 degrees to our line of site. It would be quite different if we were looking down directly into the cones. S. Kwok et al. (Astrophys. J., 689, 2008, p. 219) concluded that M27 is bipolar with multiple opposing cone sets tilted about 15 degrees from the plane of the sky. I have attempted to re-create one of their figures (Fig. 5) placing the outermost of their three cone sets over my image of M27 below. You can see that the edges of the cone align with major features. One of their conclusions was that the inner bright portion of a planetary nebula is not a good indicator of the nebula’s intrinsic structure. Please see this paper for more detail. 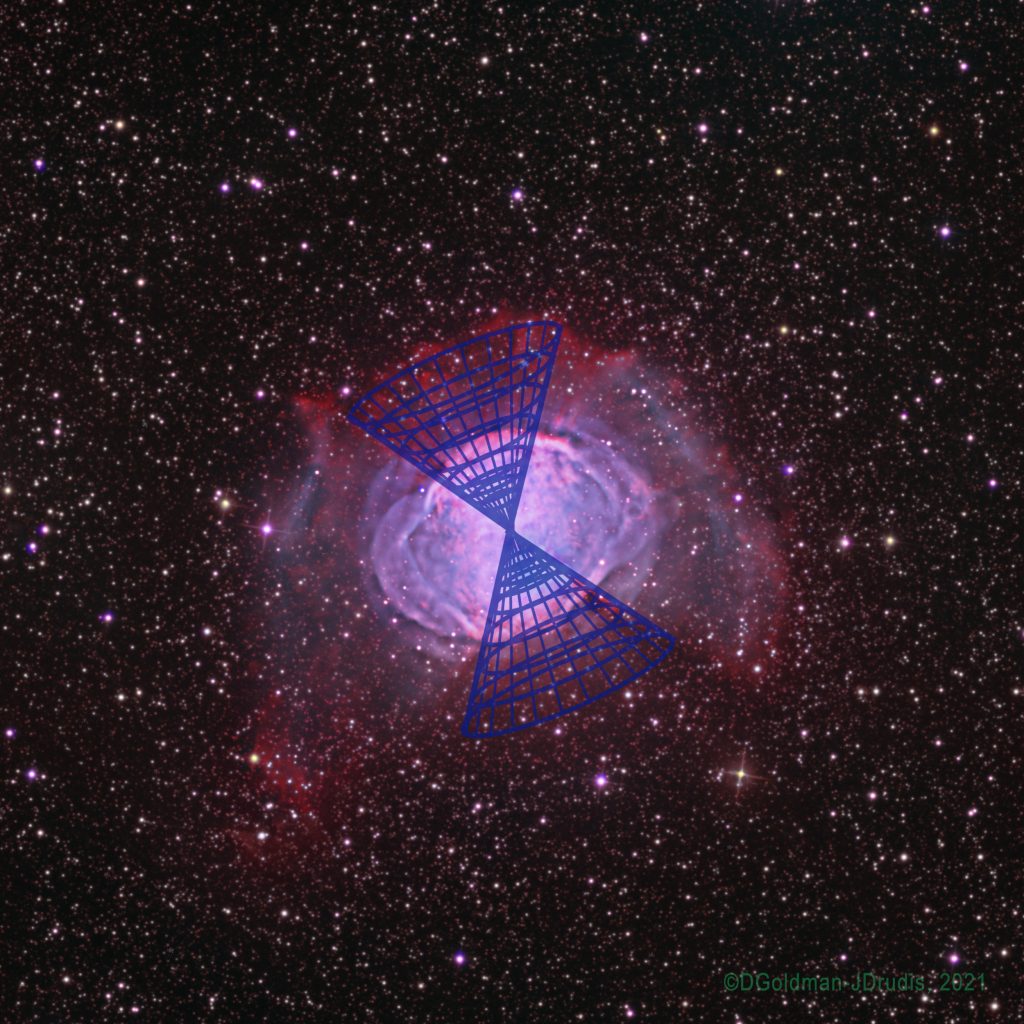