This is my first attempt with a telephoto lens. This Canon EF/L 135 MM fixed lens was placed on an SBIG STL11000XM camera using a Canon/STL adaptor made by PreciseParts. The camera and lens were held with a ballhead connector on the top the the Takahashi FSQ tube holder. The system was guided with an SBIG ST-402 on the FSQ-ED with the Paramount ME. Focusing the lens was done manually with the Inspect tab in Maxim. Flats were taken using an Adirondack electroluminescent screen. Images were processed in CCStack and Photoshop CS2. A picture of the backyard system is shown below.
I centered the image on the Horsehead/Flame. The three "belt stars" are vertical and centered in the image. M42 is clearly seen. The bright spot directly to the left of the Flame Nebula is M78, and the bright knot above M78 in Barnard’s Loop is Vdb49. The field and the framing did not bring Rigel or the other outer stars of the Orion Constellation into view. Due to the large field, I had to image between two large palm trees, one of which is shown at the right of the image below (SE). It was interesting to figure out what the strange shapes were in the first images until it was realized that they were leaves from the top of the palm tree. 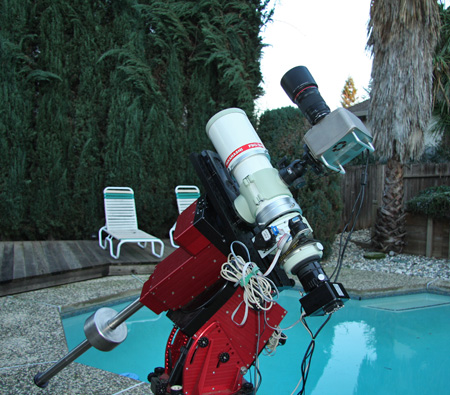